Read on, as I share with you some background on the BRWH, followed by a full coverage of the four days of the event. Click here for the BRWH official website.

BizReach currently has more than 300 engineers and designers, creating services powered by technological innovation to solve challenges related to the structural change in society.

For this reason, BizReach continues to invest in technology, such as introducing the iMacPro for everyone, providing a more productive development environment, and strengthen research in machine learning and AI across services. Recently, BizReach has been actively hiring new graduate engineers from overseas universities by adopting a "Global Standard" which eliminates the salary cap of starting pay. At present, engineers from 13 countries are actively involved in multiple BizReach business units.

Since BizReach does not provide services overseas, there has been little awareness from overseas engineers. Up to now, the global recruitment team has conducted recruiting and promotions in various countries to convey the appeal of BizReach and the attractiveness of working in Japan. However, the recruitment team sensed that a different approach is required in order to raise awareness of Tech companies in Japan and deepen ties with global top talents. 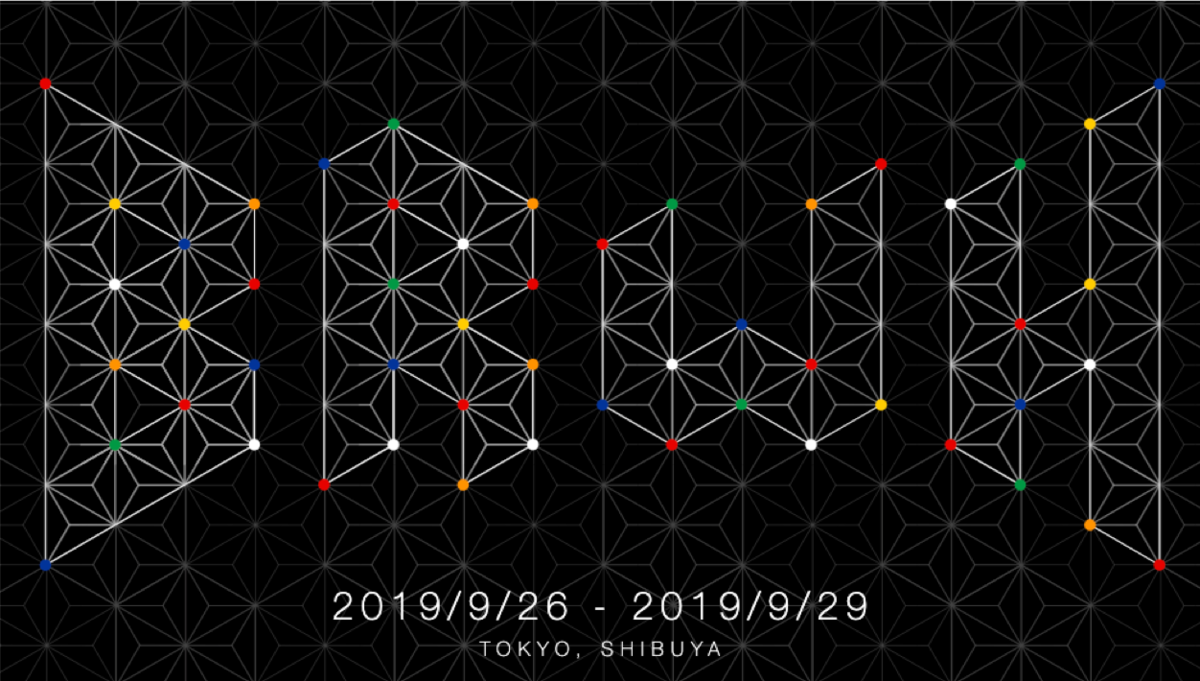 With this intention, BizReach decided to hold a Hackathon event (BRWH), a time-bound programming competition where participants compete against each other in terms of technical and coding skills.

Consequently, in this event, not only do participants get an all-expenses paid trip to Japan where they could explore the culture, they also stand a chance to win a cash prize of US$10,000 (equivalent to 1.1 million yen) for coming in 1st place, and US$3,000 and US$1,000 subsequently for 2nd and 3rd place.

The BRWH received 3,528 applicants from 58 countries and 37 participants were shortlisted via technical selection based on online coding test and resume screening. The breakdown of the 37 finalists by country of origin from 13 countries includes countries such as the United States, China, the United Kingdom, India, Vietnam, Singapore, Algeria, Egypt, Poland and France.

The participants came from world-class universities such as Stanford, Cambridge, National University of Singapore, Beijing University and the Indian Institute of Technology. They have strong track records in coding competitions, top scholar achievements or demonstrated their skills by doing internships at top global companies.

The BRWH was a four-day journey, with the welcome party of the evening of day 1, hacking on day 2 and 3, followed by the final presentations, award ceremony and closing party on the last day.

September 26th. Day 1. To show appreciation to everyone who came all the way to Japan for this event, a welcome party was held. From day 2, participants were given a choice to work individually or as a team. Therefore the welcome party acted as an opportunity for them to know each other and decide who to work with eventually as a team.

Self-introduction went beyond national boundaries and participants found their respective team after learning about each other’s strengths such as in UI design and front-end development, data analysis or backend engineering. Most participants decided to unite their strengths and form teams in order to improve their chances to get the first prize. Some teams decided to come together because they were from the same country or university, while other created multinational teams. BizReach Engineer employees who took on the responsibility of mentorship facilitated team creation. 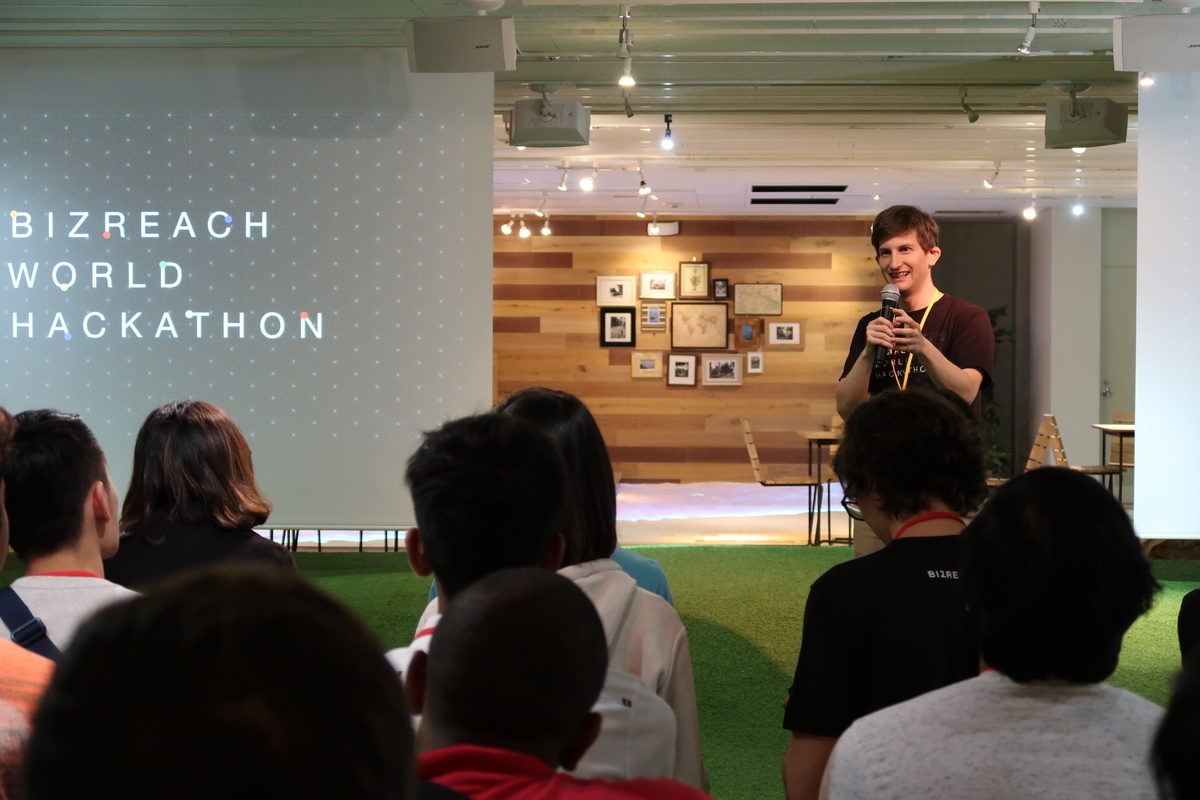 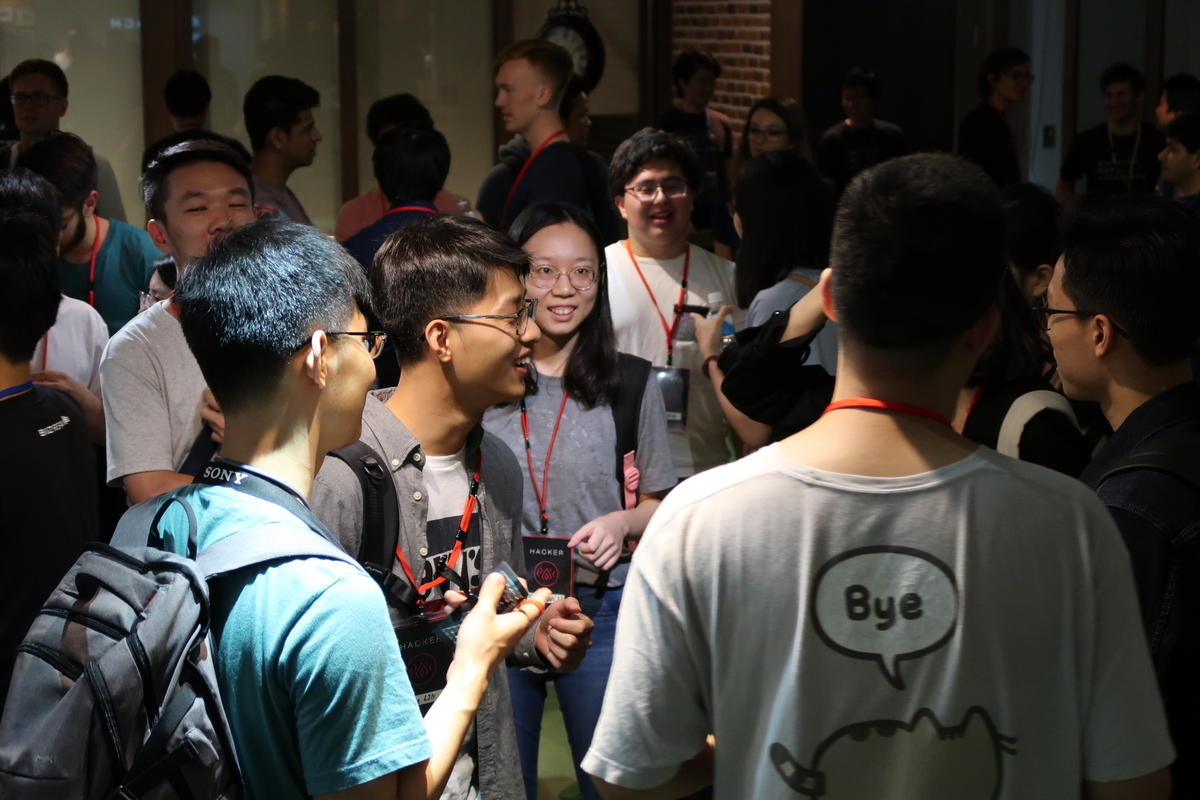 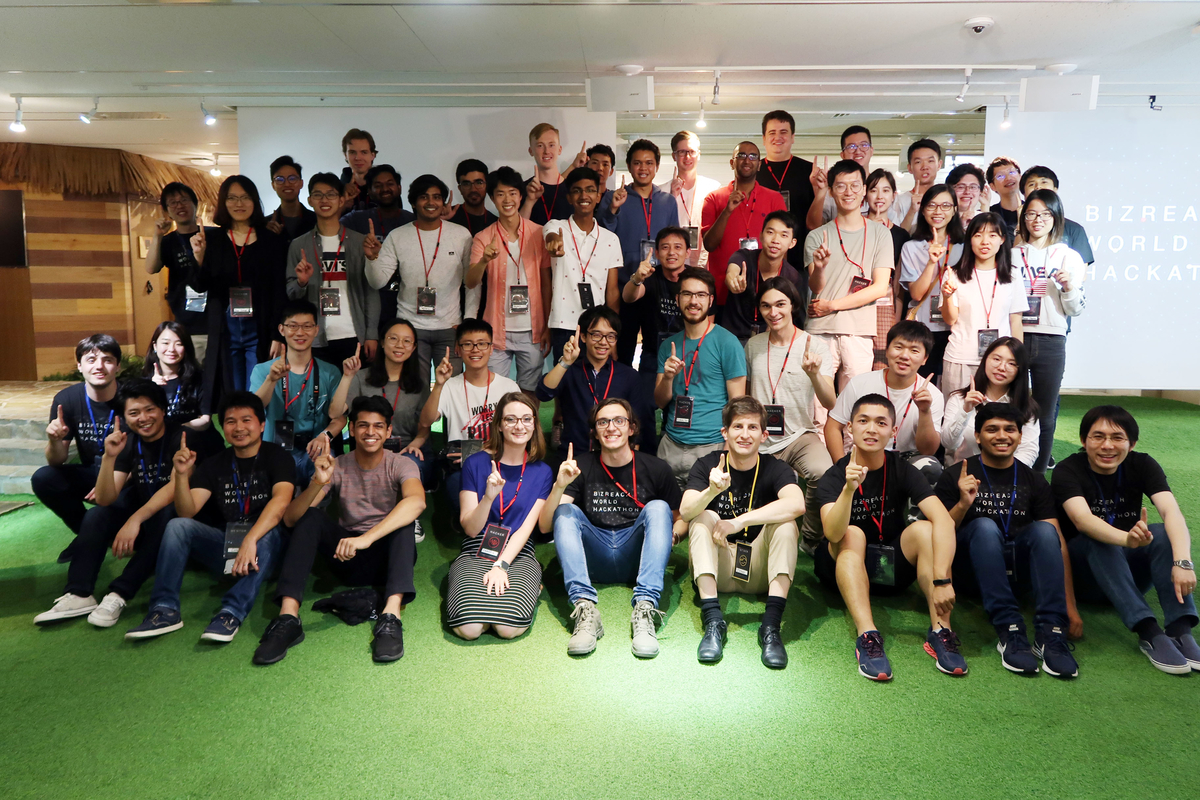 Getting in touch with Japanese culture

Day 2. This day began with a speech by Swimmy Minami, the CEO of BizReach, Inc. Swimmy who holds a BA from Tufts University, shared words of motivation and inspiration with the participants about the charm of working in Japan based on his own experience of growing up overseas and how he was motivated to start BizReach. Towards the end of the speech, spirits were further boosted as Swimmy called on the participants to join hands in changing the society together. The entire hackathon event, including the opening speech was conducted fully in English. 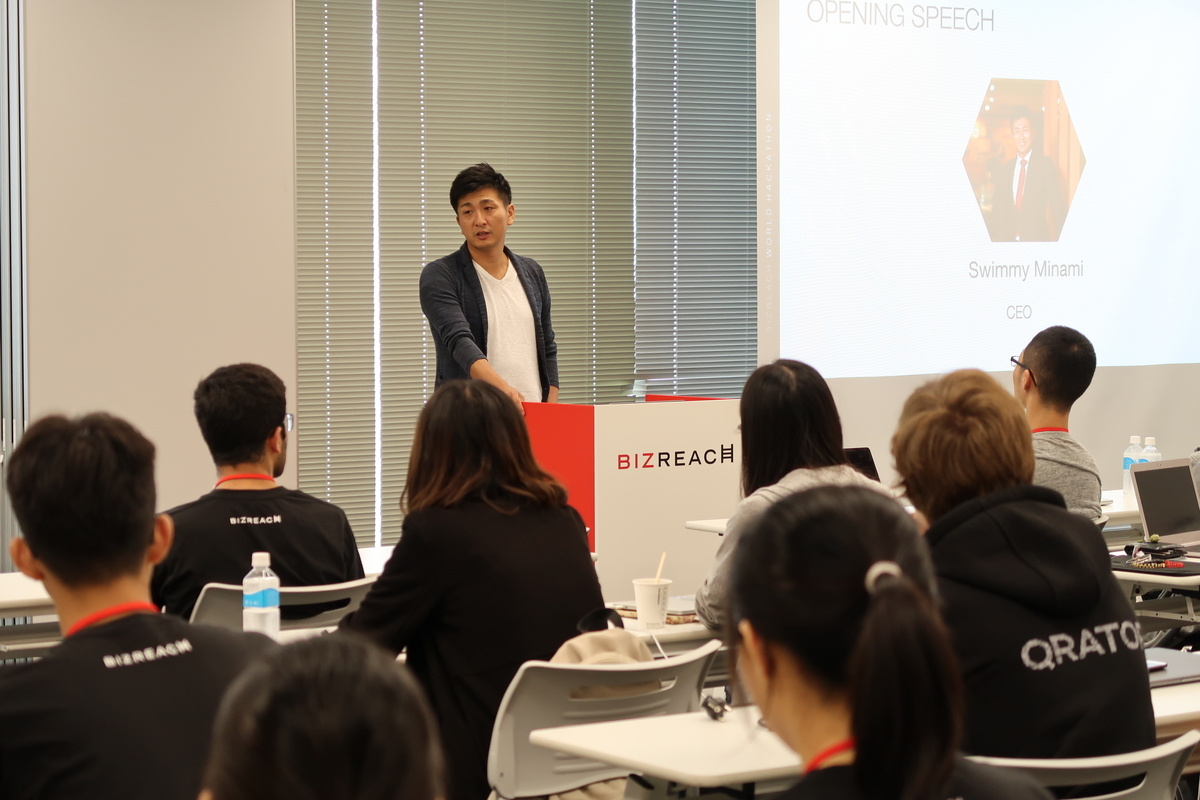 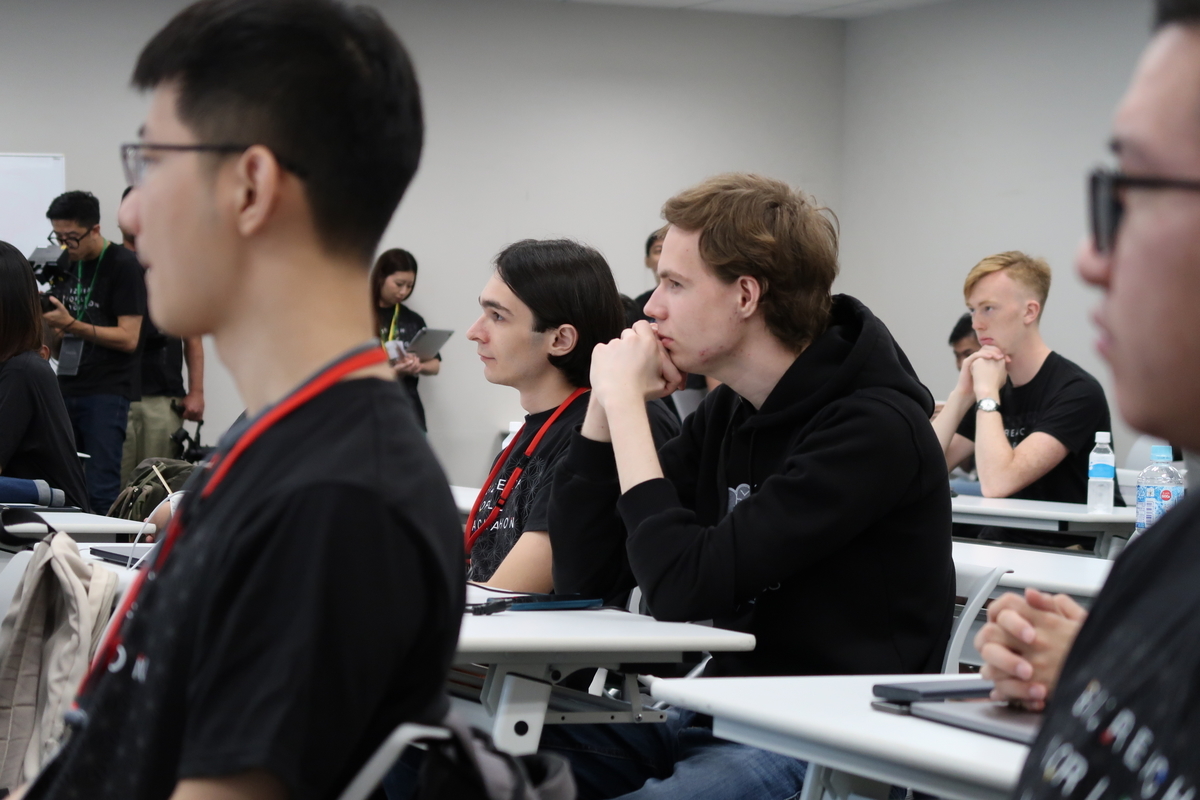 As mentioned earlier, one of the purposes of this hackathon is to widely convey the charm of Japan to people outside Japan. Since participants wouldn’t have much time visiting Tokyo during their stay, a mini tour to a shrine near the office was arranged to enjoy the beauty of Japanese architecture and the calmness of the surrounding park. Everyone seemed to have enjoyed this short moment of sightseeing in Japan and some participates even decided to offer a prayer and made purchases of fortune and good luck charms! 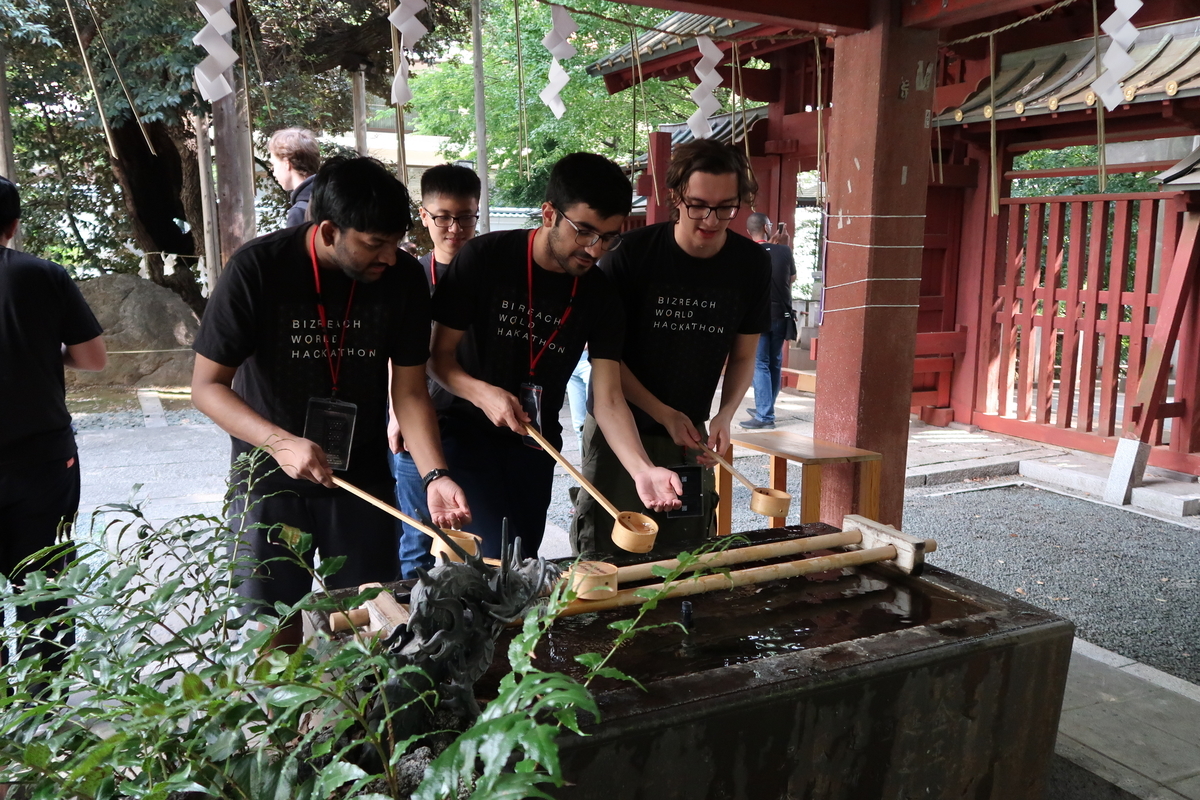 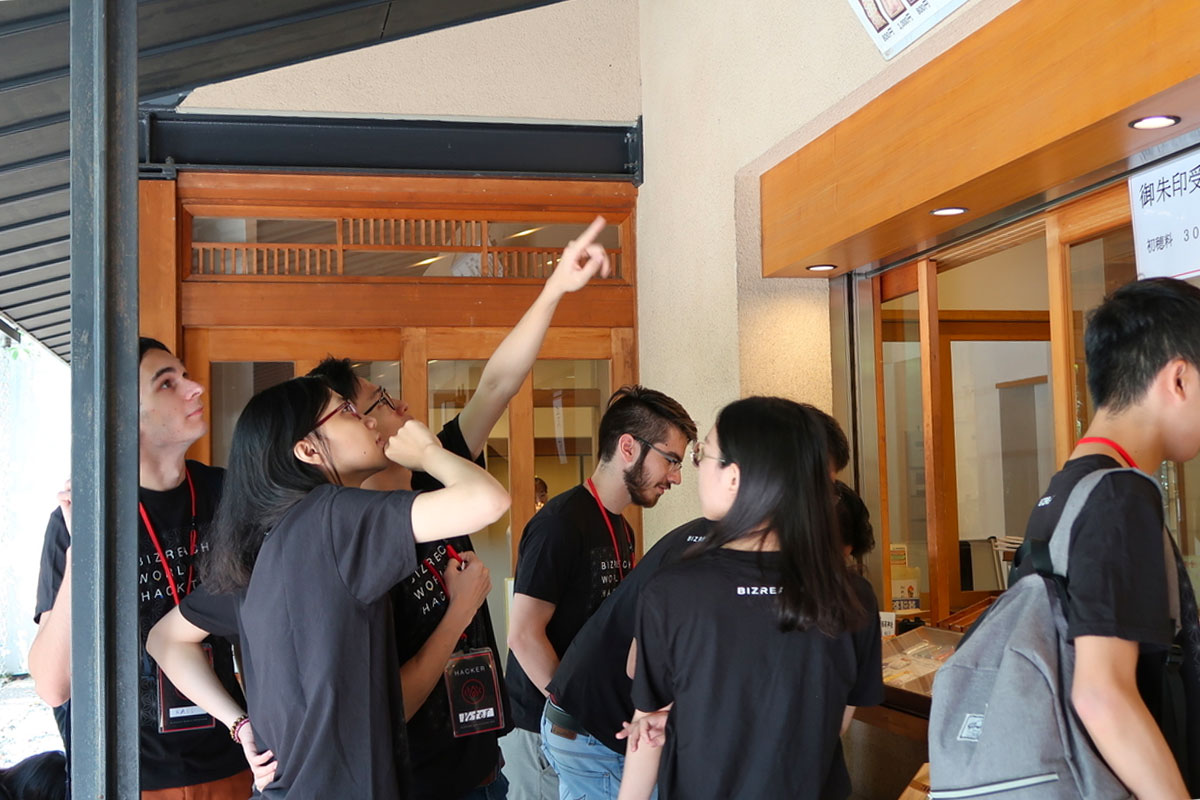 The problem to solve during the BRWH was to “use GitHub repository data (Java-based) to visualize the capabilities of an engineer”. As the teams started to work on their prototype and prepare for the presentations on day 4, it was an impressive sight to see them looking relaxed and focused at the same time. During breaks, Japanese snacks and drinks were served. Also, BizReach engineer members who were assigned as mentors, gave advice and assistance throughout the event. 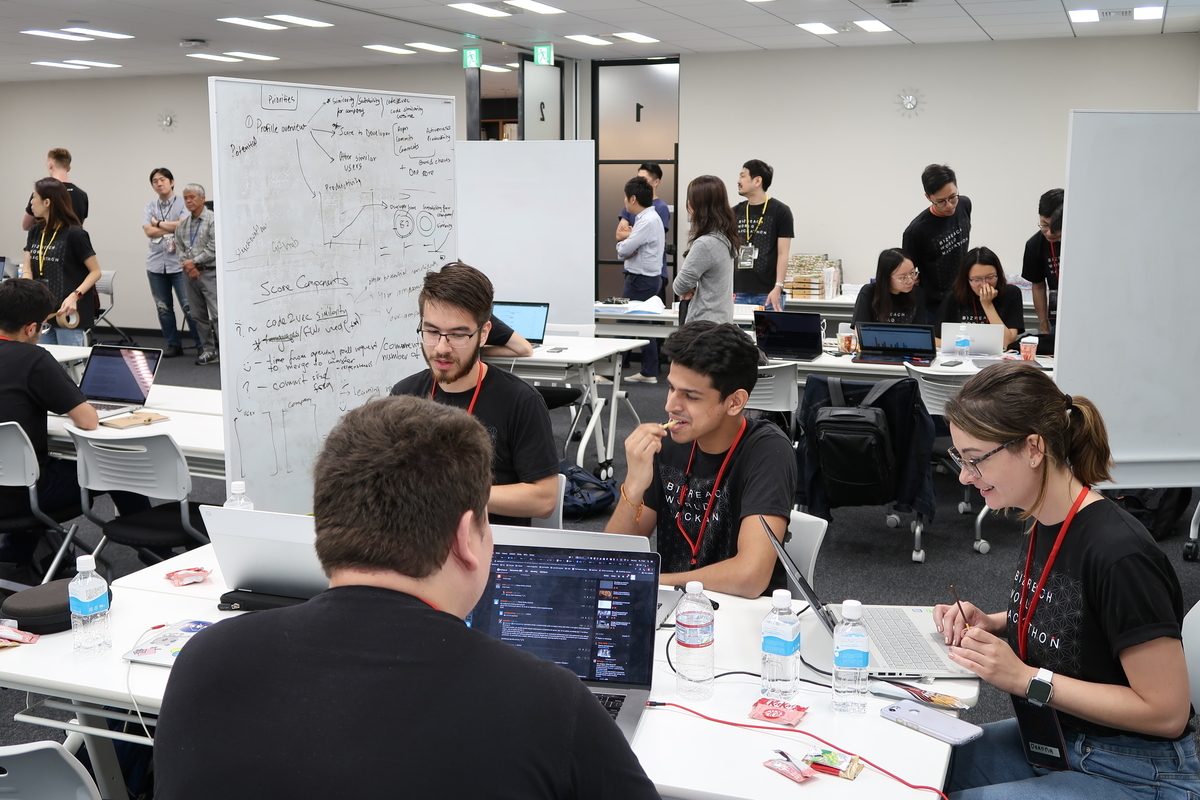 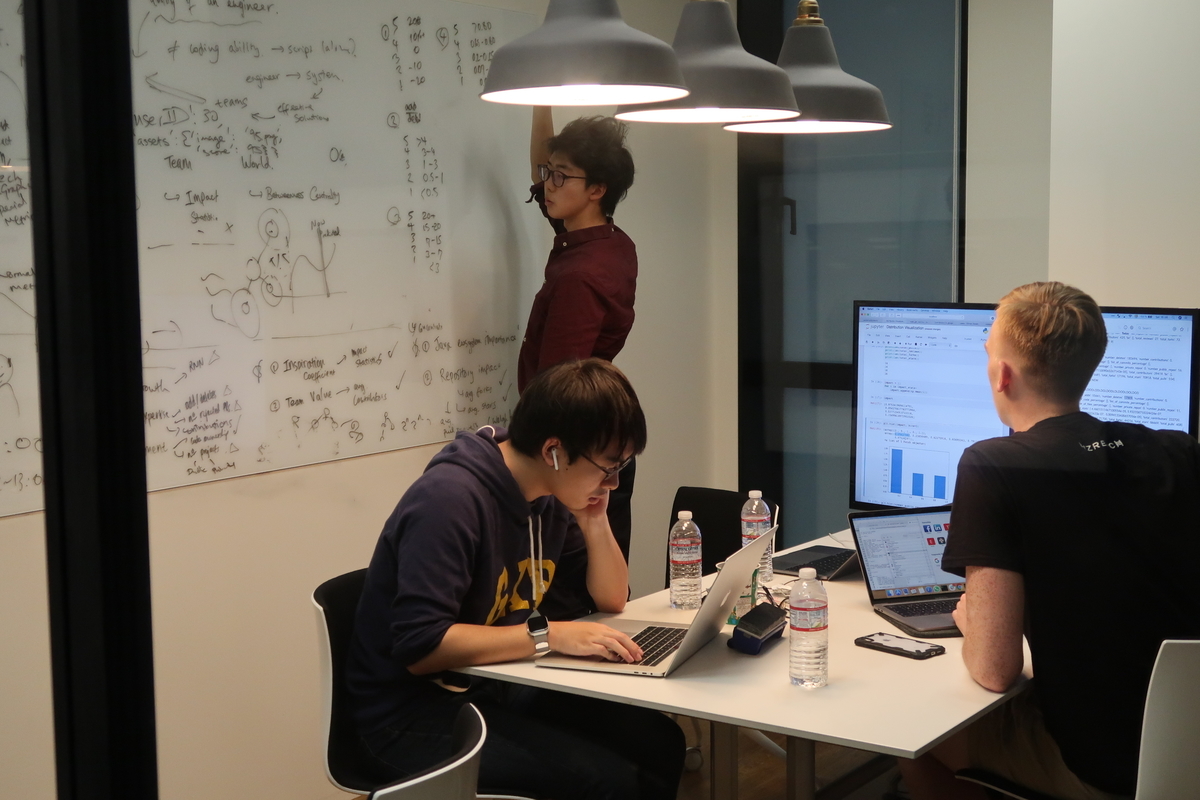 Day 3. The schedule for this day was intensive, as participants hacked from morning till night. Everyone was silently working toward the submission of the pre-evaluation deadline on Day 3 that decides about the participation at the final presentations on Day 4. Having spent long hours on the code during the pre-evaluation where the code was carefully examined, the jury expressed excitement and anticipation to the final day presentations as all teams have produced an output level higher than expected. 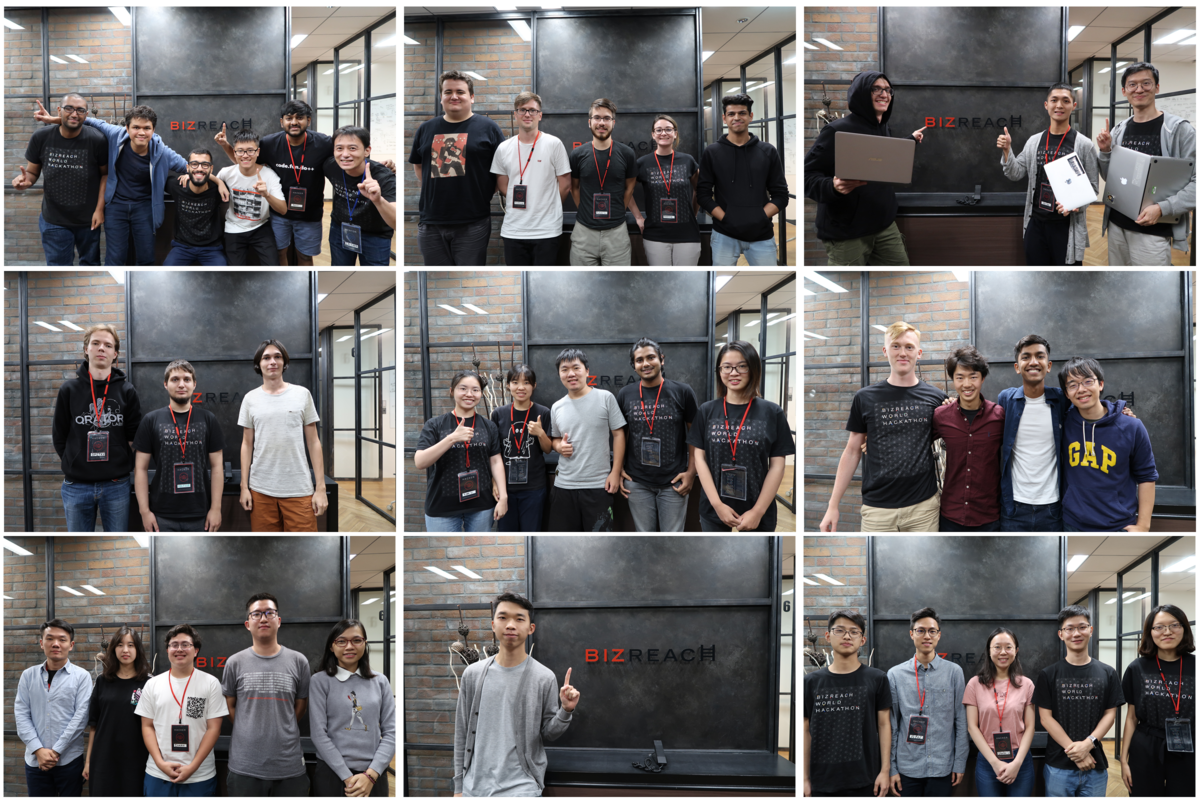 Day 4. The final day of the BRWH, which was held at Cerulean Tower Tokyu Hotel reached its climax with the final presentations by all teams followed by an award ceremony. As opposed to the relaxed yet focused hacking mode in BizReach office building, the atmosphere at the event hall was nerve-racking. Participants had their eyes glued to the screen in preparation for the pitch as they put their heads together as a team, determined as ever to make their product the best. The final presentation began as the hall slowly faded into darkness. 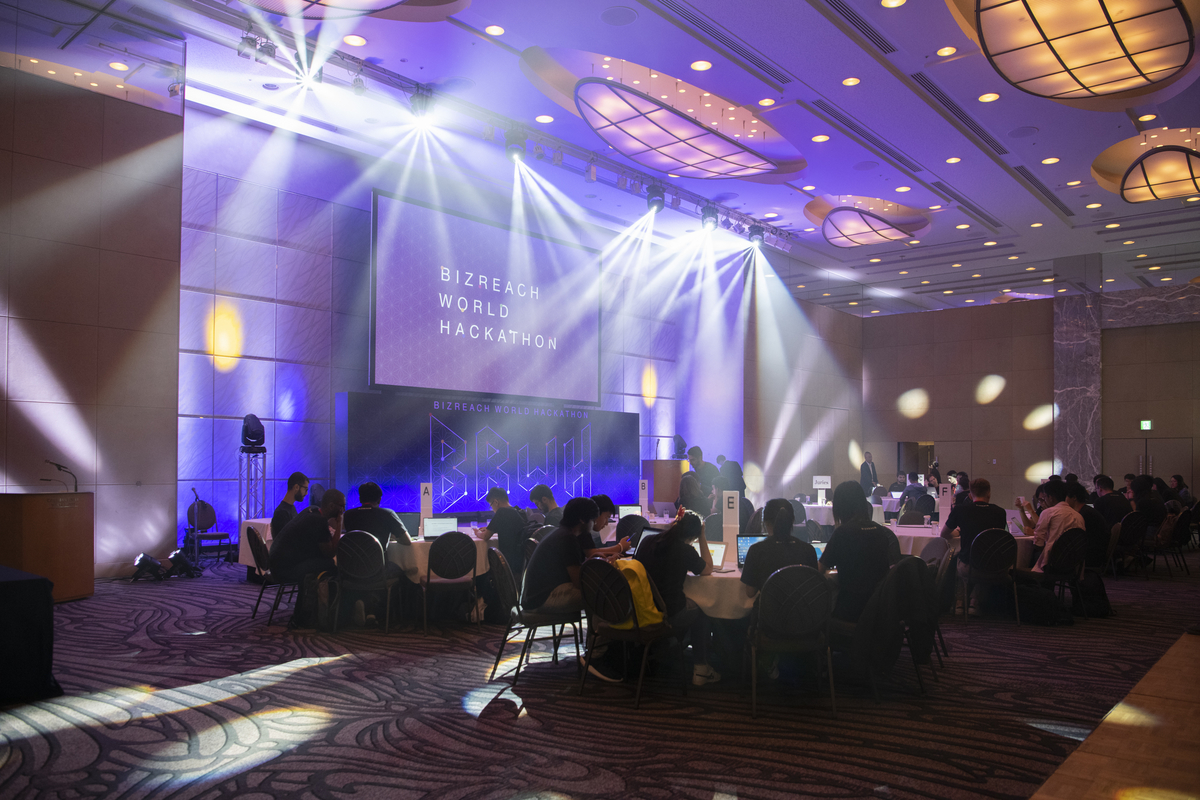 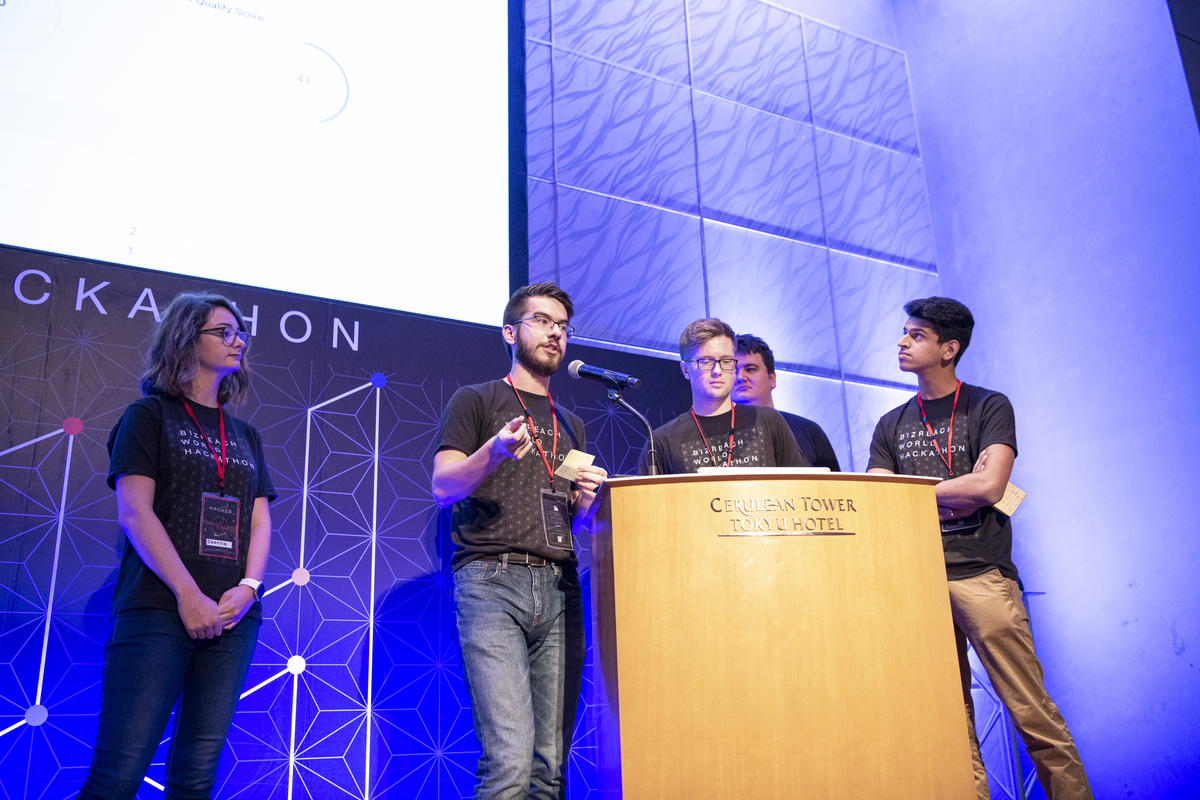 Each team was given 5 minutes to pitch their prototype and conquer the jury. The presentation included a demonstration of the prototype and the visualization of the ability of an engineer by using GitHub repository data.

One of the teams chose to determine engineering skills based on data such as the quality of the code on GitHub, the amount of interaction and activity level within the GitHub Community and how much of their code were referenced or cited by other projects. Another team implemented machine learning algorithms and developed a tone analysis algorithm to visualize the ability of a programmer. Seeing how teams cheered heartily on one another after each presentation, and team members high five each other on a job well done left a strong impression.

And the first winner goes to…

Team F consisting of two Japanese and a Swedish from University of Cambridge (UOC) and an Indian from the Indian Institute of Technology (IIT) stack up against the best in this high-level battle and crowded the cream of the crop! The team pitched a prototype that possessed great originality and high level of technical skills, hence won the hearts of the jury and took home the grand prize of US$10,000! 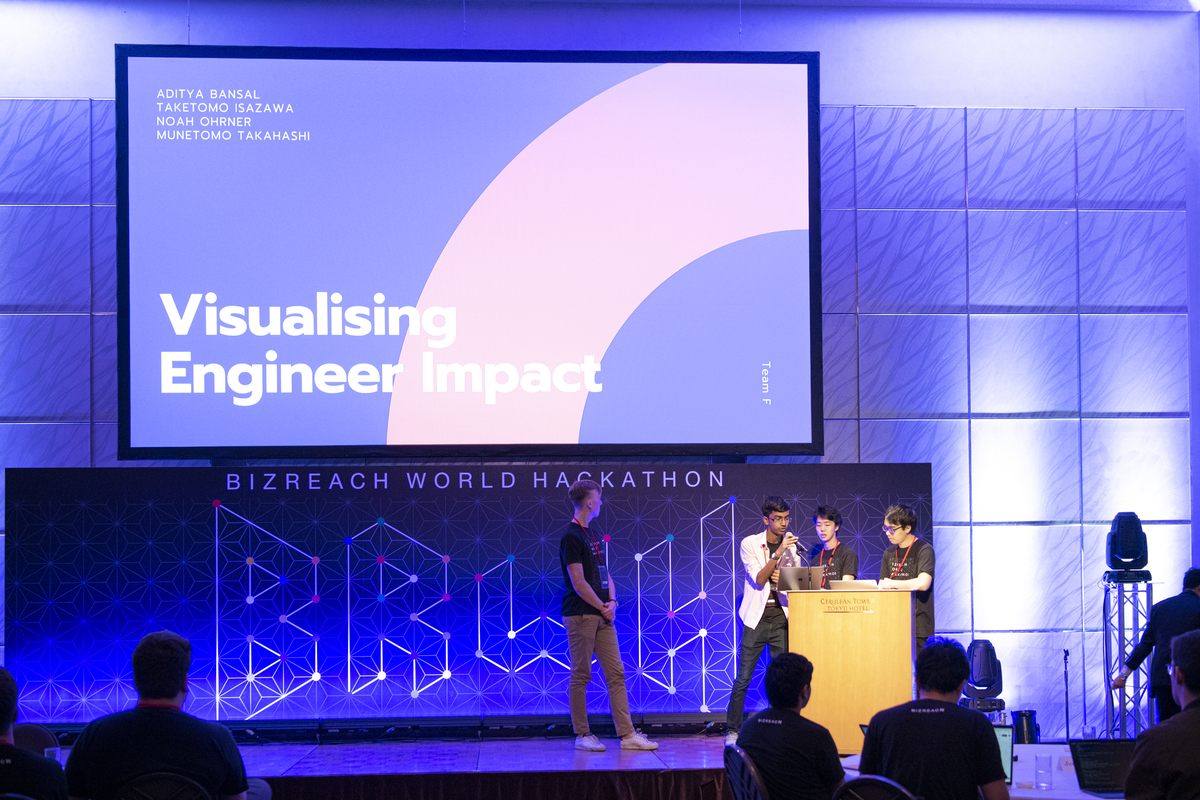 The winning team has created an indicator measuring the ability of an engineer by the impact of his work: 1) Potential Impact (Java expertise, commits), 2) Team Impact (use of the code by team members - defined as “inspiration coefficient”), 3) World Impact (repository impact in the Java ecosystem). For doing so, they defined an “inspiration coefficient” that depends on graph theory, as well as predicting the growth of an engineer’s potential impact using predictor ML algorithms.

Team F was highly praised by the judges for defining a new way to measure an engineer’s ability, their calculations and application of technologies (incl. ML techniques), as well as for their good presentation and visualization.

Comments from the winning team: “I have always been interested in working on projects that will make an impact on the world, and I decided to join this hackathon because I thought, it was a great opportunity to try something new. Indeed, I had an amazing experience, meeting people from different countries and learning about Japanese culture. In the short period of time of two days spent in the development of our prototype, our team worked hard and eventually achieved our goals. I'm really happy that we won." 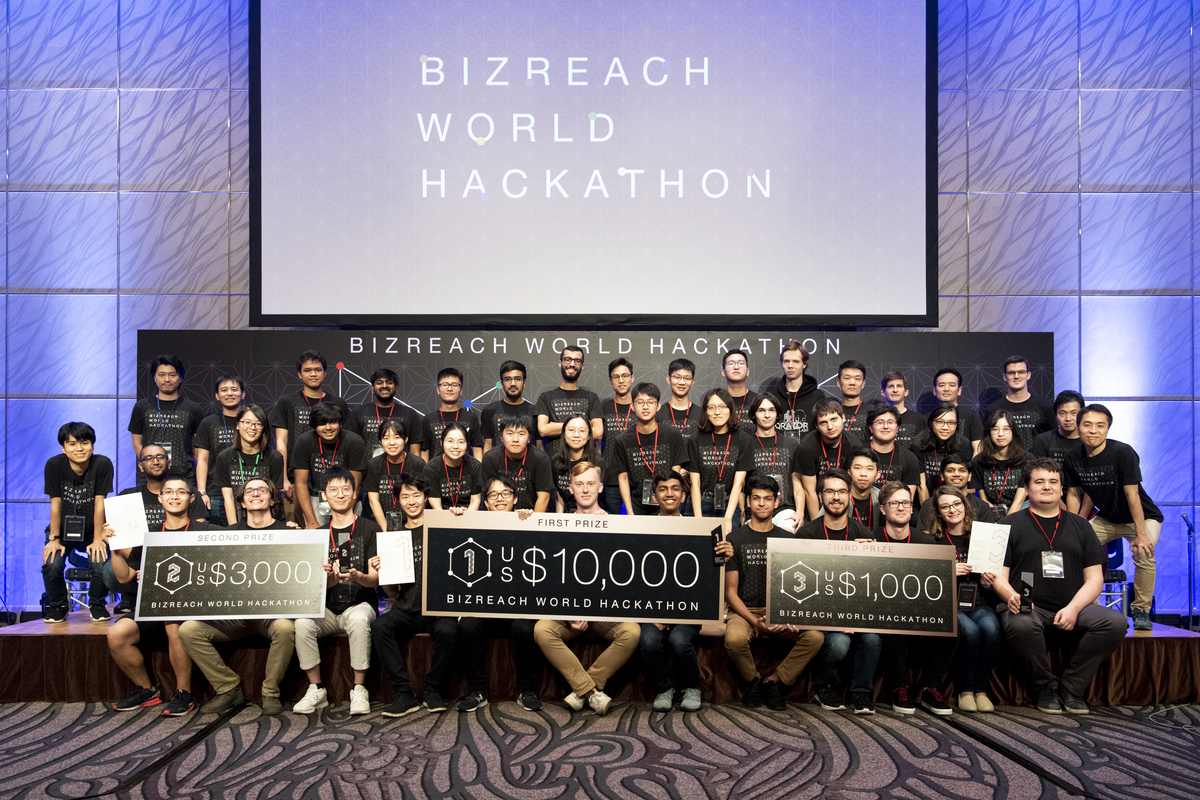 The jury was made up of 6 members, including Stefan Meier VP of Engineering who presided over the Jury committee, Mr. Sonoda, Chief Information Officer and Executive Officer, Mr. Sugaya, Manager of AI Team, and 3 other international engineers. The judgement criteria were 1) idea, 2) technical complexity and 3) presentations (ie. demonstration and proof of concept). Considering that all teams exhibited great technical capabilities and teamwork far beyond initial assumptions, not forgetting that the hackathon had kick-started at a high-level during assessment of pre-screening coding test, the jury had to rack their brains for a decision in picking out the best.

Post-event satisfaction & feedback survey: 100% participation satisfaction and 80% of the participants expressed interest in working in Japan

The feedback collected from the participants (see below) suggests that the event was very well appreciated and the goal of BizReach World Hackathon has been achieved.

・ I have participated in over 25 hackathons in various countries so far, and this hackathon was the most amazing!
・ It was a great opportunity to meet really wonderful people and mentors and tackle challenges with people from different parts of the world.
・ I learned that BizReach is working on unique and interesting issues in Japan with an excellent mission and strong technical capabilities.
・ BizReach uses the same processes and work styles that is used in the American tech company.
・Japanese businessmen always had the image of working overtime, but I come to know that not all companies were like that.
・ My goal was to participate in the hackathon and work in Japan.
・ Good weather, nice city, interesting culture! I didn't know that Japanese food is so delicious!

On top of that, 100% of the attendees expressed a very high satisfaction with the event and more than 80% of all participants expressed interest towards working at BizReach, whom later successfully proceed further for a recruitment selection! There is nothing like knowing that through interaction between BizReach employees during the event, BizReach is considered as an attractive workplace to potential candidates.

Organizing a hackathon was a first big attempt for BizReach which took half a year of preparation. However, the exciting and beautiful 4 days experience and results have proven that all the hard work had been worthwhile. This event has enabled BizReach to harvest ideas from across the globe as it involved external participants from 13 countries who were full of passion and energy. Not only were they equipped with high technical skills, their high motivation and curiosity about the unknown were a great inspiration to members of the event committee and in-house engineers. Lastly, thank you very much to all participants for coming to Japan and BizReach! 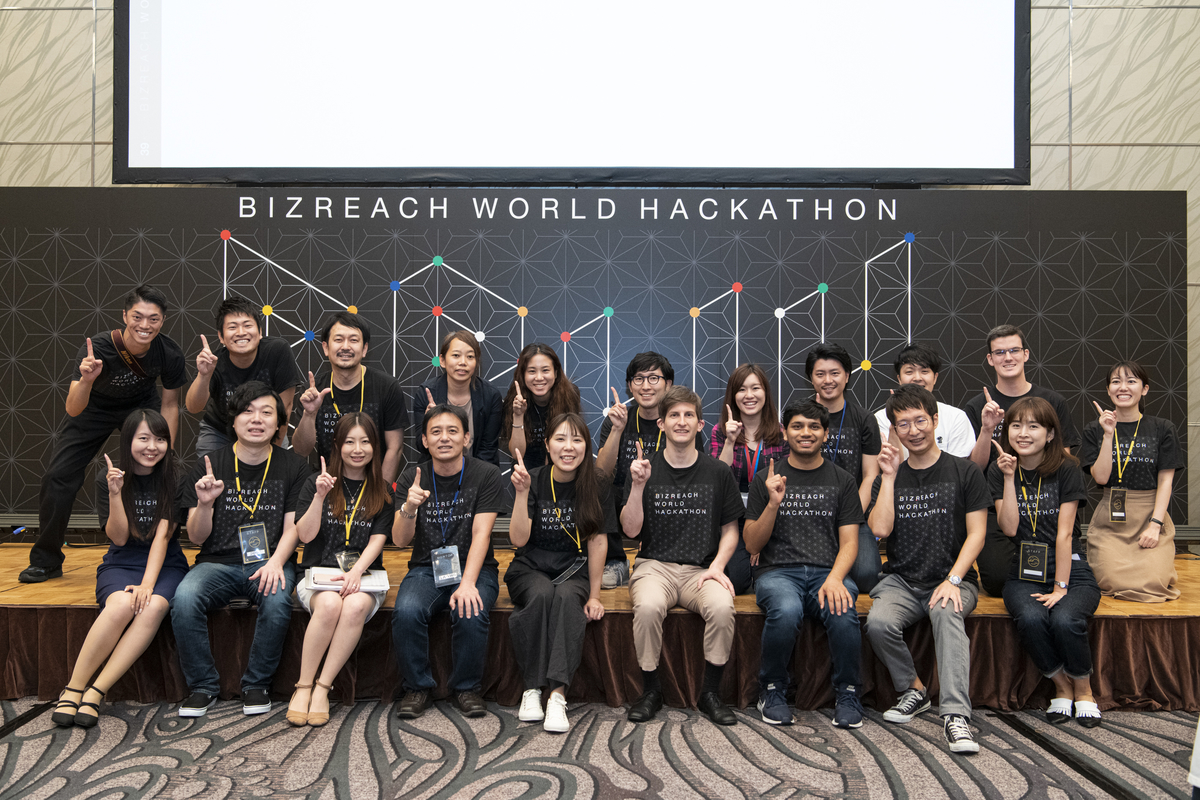 After working as an Internet advertising agency, joined Bizreach in 2015. Responsible for service strategy design and CRM as BtoB marketing and “Bizreach” product planning. moved to the HR / recruitment marketing group in August 2018 and is responsible for recruitment branding and owned media management.