BizReach Succeed is a business succession, and mergers and acquisitions (M&A) platform released in November 2017. In 2 years, it has grown to become one of the largest M&A platforms in Japan in terms of the volume of registered accounts.

In this interview, Yohei Maeda, the man behind the launch of BizReach Succeed, talked about the background for the process that led to the birth of the service and its future prospects. Yohei himself had played a part in the succession of an office managed by his father and he was able to draw on that experience when running this project.

Yohei Maeda
After graduating from the State University of New York, Yohei worked as an engineer developing enterprise software for a well-known IT company. He joined BizReach in 2011 when it had only less than 20 members. He started in the BizReach Department and later on was in charge of launching startups and overseas projects. Currently, he heads the Business Succession and M&A Department and supervises the service design and business development of BizReach Succeed.

"I Want to Solve the Succession Crisis in Japan"

ーLet's get right down to it. Can you tell me what kind of service BizReach Succeed is?

Furthermore, BizReach conducts a preliminary screening of all registered companies to ensure secure processing. Only corporations who pass the screening are able to view information for the business succession. With that, our clients can rest assured that information is communicated while retaining high anonymity. And that is one of the things that make BizReach Succeed stand out.

ーYou've been involved with BizReach Succeed since it was launched. What was the process it went through before being released?

BizReach provides recruitment support not only for (large) companies located in the main cities but also for SMEs nationwide. Along the way, we were faced with the reality that a lot of companies were unable to find successors for their businesses. A report released by the Ministry of Trade and Industry had also mentioned that by 2025, around 2.45 million SME owners will be over 70 years old and half of those companies, a number amounting to 1.27 million are facing the risk of closure due to the lack of successors. Difficulty in securing successors is becoming a serious problem for companies and society. Already, a lot of companies are closing down every year despite being profitable due to the absence of successors.

That being said, BizReach Succeed was launched with the desire to provide a service that can resolve this problem.

ー What advantages were there to venture into this new business within BizReach, Inc.?

Through recruitment support activities, BizReach has had connections with banks located in rural areas backed by a wealth of experience in dealing with business succession and M&A. So there is a clear advantage when it comes to establishing relations and gathering information. Also, BizReach is well-versed in building recruiting and job-seeking platform. By utilizing its technologies and know-how, it can put itself in a superior position when providing business matching opportunities.

"Our Service is has been Long Sought After by the Market."

ー What sorts of things were you conscious of, and what do you think needed to be done when BizReach Succeed was first launched?

In the beginning, our first and foremost objective was to get the platform up and running. We scrambled to build and expand our database, as well as have a keen awareness to develop a product intended to create opportunities for M&A.

ー Did you face any difficulties when looking for companies to register with the service?

Actually, it went smoother than I had thought. We caused more of a sensation than we expected. For example, the product was featured in a lot of media outlets just after its release. The number of companies that showed an interest in our service surpassed our imagination. This comprised not only transferring companies but acquiring companies as well. It is evident that the market needed a service that visualizes the need for such a business project. Right from the start, I had witnessed firsthand the huge potential BizReach Succeed holds.

ーSo the winds were in your favor! Have M&A transactions been closed through the service?

Yes. We closed a few transactions in half a year after the release and we have been consistently doing so monthly. Honestly, I was so relieved when we sealed our first deal. Even with the response received during the release, the claim that this service was needed by society would remain a hypothesis until we conclude an M&A deal. Upon making our first deal, we were able to prove that our service had a viable business model. I was so happy.

ーAfter that, what goals did you define to boost product growth?

During the next phase, we concentrated on maximizing the possibility and improving the ease of search for matching companies. In sum, a greater number of meetings increase the likelihood of closing more deals. And that was the goal we set for the next stage.

In order to achieve that goal, we needed as many companies from all over the country to register with us. And as part of the efforts to achieve this goal, the department needed more manpower to handle the increase in capacity. "Entrepreneurship Is to Seek Fellowship" has been a well-loved saying in BizReach since it's foundation. The service continues to grow as we recruit new members by ourselves. And now, the department size that started with only 6 members has grown up to 30. 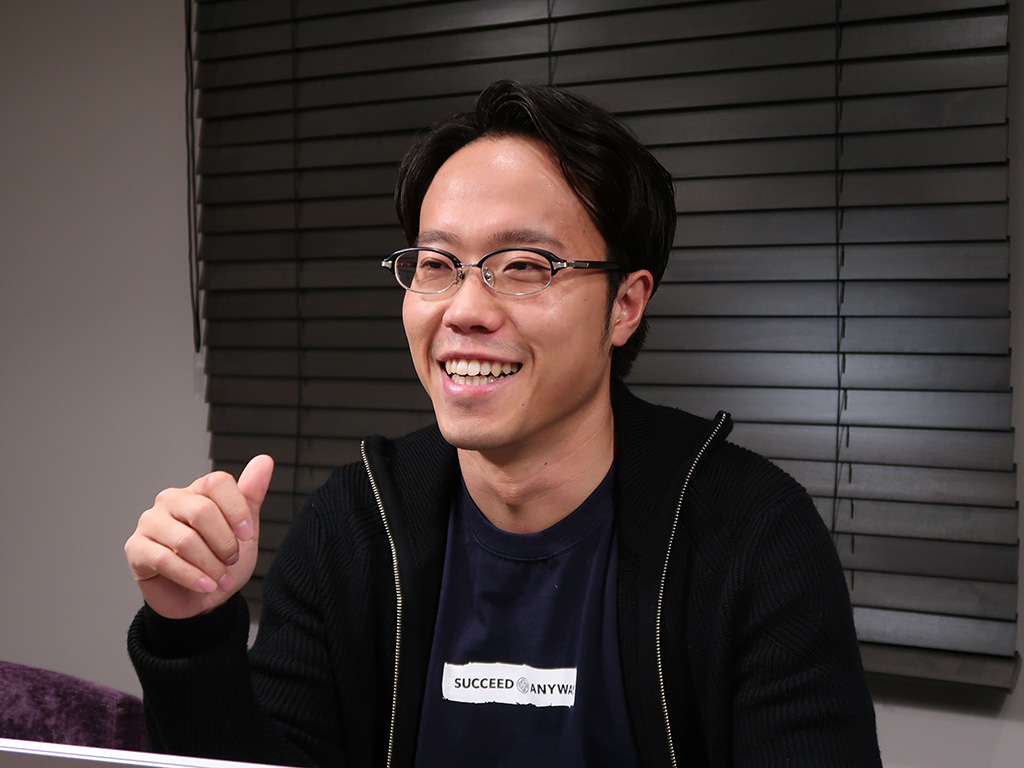 Encouraging the Use of the Platform for M&As

ーWhat are the problems Succeed is facing right now?

It's been 2 years since its release. I feel that the service needs to evolve from one that promotes engagement to one that can thereafter assist our clients in having smooth correspondences that lead to successful transactions.

Up until now, we usually do not get involved with transactions after scheduling meetings between business owners. Currently, we are developing tools that will fortify support framework to ensure smooth correspondence between the companies even after these meetings. Starting with visualizing the process that leads to closing the deals, we plan to better understand the issues that may arise after the initial meetings and formulate ways to solve them.

"I Want to Be There for Business Owners."

ーDo you have a vision you want to fulfill in the field of business succession and M&A?

The term M&A has a negative connotation of "hostile takeover of the company" in the minds of most people. But such adversarial M&As activities are in fact extremely rare. In most cases, M&As are executed under amicable conditions that leave both parties satisfied. M&A activities are simpler than what most people think it to be.

Having said that, it requires highly specialized knowledge in various aspects such as law, finance, accounting. It's not a walk in the park. For this reason, we have to develop a system that can render support for those matters as well.

Also, M&A activities are subject to substantial expense such as retainer fees and success fees. This might not be a problem for large companies, but it can pose a financial burden for SMEs that are considering business succession.

Currently, transferring companies can use BizReach Succeed absolutely free of charge. We provide them with functionalities that utilize BizReach's technologies and resources to the fullest. Using methods unique to BizReach, we want to usher M&A into a new era, to transform it into something more user-friendly and less out of reach.

ーI sense that you feel strongly towards the field of business succession and M&A.

Actually, my father just recently sold off his business. It was a small office that started from just one desk. As a child, I watched in awe as it grew right before my eyes. I began to think of inheriting the business or starting my own company in the future. Though I ended up not inheriting my father's company, the desire to launch my own company and own my own business stems from there.

ーAre you still planning to start your own business?

Yes, I still want to manage my own business. I am currently managing BizReach Succeed and I believe that the experience will serve me well in the future. I am optimistic that this will give me the opportunity to exceed the dreams I have for myself. On top of that, it brings me such fulfillment to be able to assist business owners through BizReach Succeed.

I have watched my father go from starting a business to selling it off. So I am that much more empathetic towards business owners. And for that very reason, I have the strongest desire to help BizReach Succeed evolve into a service that can provide better solutions to their problems.

ーThat's it for today. Thank you very much for your time!

Shimpei joined BizReach in 2015 after having worked in online advertising. As part of the product planning team, he was in charge of the service strategies and CRM for B2B Marketing and BizReach. Since transferring to the HR/Recruitment Marketing Group in August 2018, he has been in charge of the company's recruitment branding and owned media.